The Redlands Police Department is deeply committed to the use of volunteers to meet the goals and objectives of the organization. By utilizing community members to perform both sworn and civilian functions within the organization, the quality of life experienced in Redlands is enhanced. Police activities and functions that would have been unavailable to the community due to fiscal restraints are made possible through the thousands of hours donated by our volunteers. In return, volunteers are given the opportunity to serve the community as representatives of the Police Department, taking great honor and pleasure in personally helping to make the City of Redlands a safer and better place to live, work or visit. 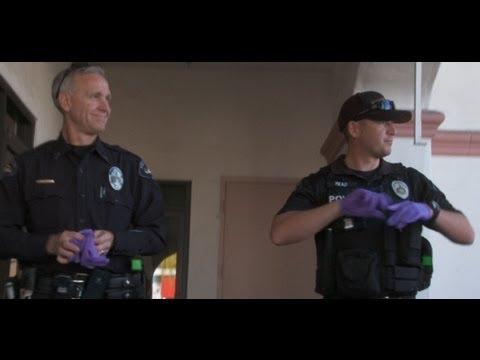 The Redlands Police Department Reserve Unit is comprised of volunteers from a variety of professions, who live in the city or neighboring communities. The Redlands Police Department hires only those individuals who have successfully completed the training requirements for a Level I  & Level II Reserve Officer. This training may be obtained at one of the local community colleges, in conjunction with the Sheriff’s Academy, either in the form of training modules or a regular police academy. Reserve officers receive extensive training in the many facets of law enforcement, which they routinely put to use while assisting the department.

Reserve officers render valuable assistance to all units in the department including; patrol, traffic, community policing, and investigations. Reserve officers most frequently assist in patrol related activities such as traffic, special events, and crowd control. They are also involved in investigative and administrative assistance. Reserve officers are available for call-out to assist in special emergency situations, such as flooding, fires, major traffic collisions and crime scene security. The officers provide other public service assistance, such as maintaining security at school functions and sports activities. Reserve officers assist in conducting downtown patrols during the Christmas season and policing the Boys and Girls Club “Late Night Hoops” basketball program.

The Reserve Unit also serves as valuable training for future law enforcement officers. Throughout the history of the Unit many members have been hired by the Redlands Police Department and other local agencies as fulltime police officers. The success of hiring reserve officers is evidenced by the fact that the majority of the Department’s Executive Staff were reserve officers with this department.

The Reserve Unit currently consists of 3 members, who donate their hours to the residents of Redlands. 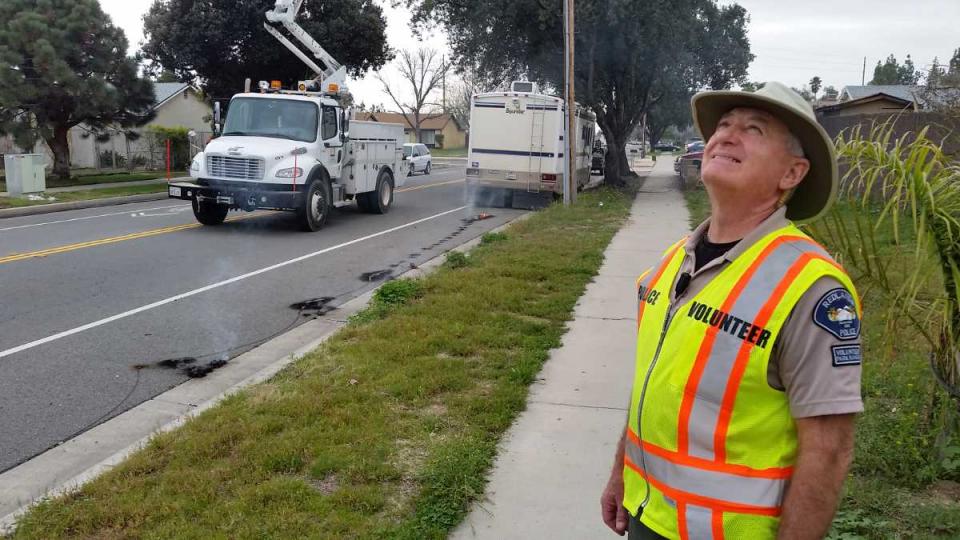 The Redlands Police Department’s Citizen Volunteer (CV) was established in 1991. The structure of the volunteer unit was predicated on the concept of a highly, visible, uniformed. unarmed, “eyes and ears” volunteer patrol force comprised primarily of retired community members seeking an opportunity to assist their local Police Department in making the streets of the community a safer place. Since that time the CV unit has expanded its responsibilities to include participation in all non-hazardous functions conducted by the department to include a wide range of duties including patrol, special events and administrative duties within the department. The unit consists of more than 70 members and membership is now open to those community members 18 years of age and older and to those interested in only performing administrative duties in lieu of patrol, to include members who have special physical needs which might preclude field duties. 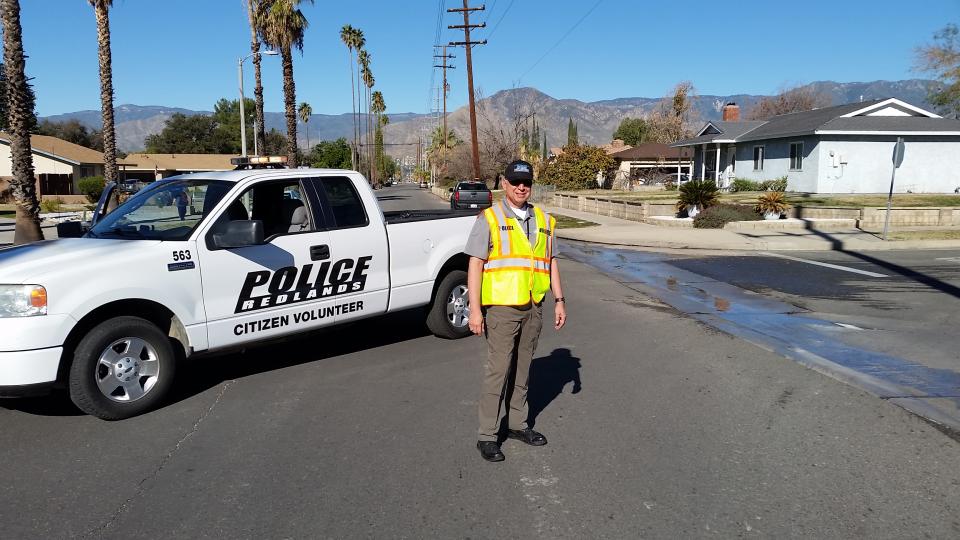 New members are constantly being recruited for the CV unit. Those persons 18 years of age or older wishing to be considered for membership in the CV unit may download the Citizen Volunteer Application or at the front counter of the Redlands Police Department, located at 1270 West Park Ave, Bldg #C.

If you would like additional information you can email Sgt. Jeremy Floyd. 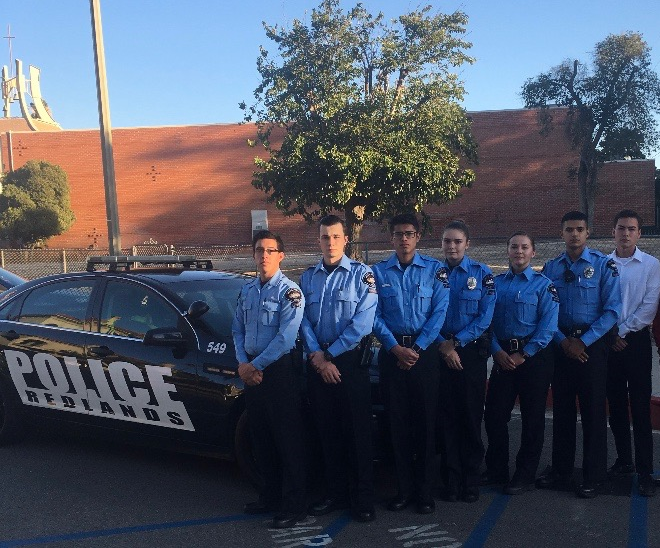 Young men and women interested in joining the program must be at least 15 years of age and no older than 21 years. The program is one of career exploration and education for youth interested in learning about the field of law enforcement. The program is not designed to rehabilitate troubled youth, but to further the knowledge of youth of good moral, ethical, and educational standing, maintaining a GPA of 2.0 or higher. Applications may be obtained at the main police building, 1270 W Park Ave, Bldg #C, Redlands, and are accepted on a continuing basis. All applicants are carefully screened to ensure they meet the requirements of the program. Those applicants who pass the initial screening are interviewed and if selected, placed on a six-month probationary period.

The Explorer Program holds two monthly meetings addressing training topics related to law enforcement and assigning special duties such as parade details and other special events. The program also incorporates training in areas of civic involvement and special projects which benefit the entire community. Explorer Program members provide assistance to: the Redlands Bicycle Classic, Run Through Redlands, Y.M.C.A. annual Home Tour, bicycle rodeos and other safety fairs. The Explorers also participate in ride-alongs with on-duty police officers on patrol shifts. In the past, Explorers have donated more than 4,500 hours of service to the department and community!

The success of the Law Enforcement Explorer Program is obvious, as several of the current officers and members of the department’s Executive Staff received their first exposure to police work in this program.

Interested persons may obtain an application online or by calling the above number.

The Police Chaplain Unit consists of volunteer ministers of varying faiths. The program is a crisis ministry designed to offer a professional religious/social ministry to the people of Redlands and the members of the Redlands Police Department through counseling and crisis intervention. Chaplains support and assist officers in providing the best service possible to the citizens of the City of Redlands. These ministers are on-call 24 hours a day to bring comfort, consolation and assistance to persons involved in crises, accidents and catastrophes. With an officer, they will notify members of a family when relatives are involved in life threatening situations where injury or death has occurred.

The Chaplains not only respond to callouts, but ride in the patrol car alongside the regular officers and frequently find themselves in developing crisis situations. This is when they are most beneficial by bringing a calming effect to the situation.

In 2009 members of the Chaplain Unit were called out on many occasions to be with, and minister to, the families and victims of violent crime. They have also counseled members of the department through crisis situations in their lives.

The foundation for any community policing activity is based heavily on the successful development and implementation of community partnerships. It is through this collaborative use of community resources, members and organizations to accomplish common goals and solve problems that the community policing philosophy becomes an integral part of the community culture. Working as partners in a team environment develops trust and a sense of community among participants and those affected by the group’s efforts. A major result of these efforts is a feeling of ownership throughout the community for maintaining a high quality of life. The Police Department is committed to expanding on its current partnerships, with an emphasis on bringing new groups and individuals into the process.

The Youth Accountability Board (YAB) is formed to address first time, non-violent juvenile offenders. It consists of a citizen review board that hears cases and recommends local work sentences.

YAB has begun an improved method of monitoring our active youth. The use of interns from the University of Redlands has proven to be an effective tool. New working board members are being recruited who do not view their position as “honorary” but see it as an opportunity to serve “at risk” youth.

There were 84 cases heard by the YAB in 2005. The board spends an average of four months monitoring minors assigned to them. The monitor ensures that the contract agreed upon by the panel and the minor is completed.

This program is instrumental in the reduction of juvenile court congestion throughout the County of San Bernardino.

Starting in 1996, in conjunction with the United Way of the East Valley, the department undertook a major community-based policing initiative intended to fundamentally alter the traditional view of crime prevention. This collaborative initiative, called Building a Generation, intends to affect substantial and meaningful change in Redlands by re-defining those factors which place adolescents most at-risk for drug and alcohol abuse, delinquency, teen pregnancy, violence and dropping-out of school. Its sponsors included the Redlands Community Hospital, Loma Linda University Medical Center, the Redlands Area Inter-faith Council, Trinity Evangelical Free Church, the Redlands Noon Kiwanis, the City of Redlands and the Redlands Unified School District.
The Building a Generation collaborative is based on the following assumptions:

In 1996 Building a Generation contracted with Developmental Research and Programs (DRP) of Seattle, WA. – whose founders are the nation’s leading experts in Risk Focused Prevention – to conduct training of East Valley community leaders and begin the process of an empirically-based “Community Risk Assessment”. This assessment will result in an exhaustive report outlining the youth risk factors most prevalent in the East Valley area. With this information in hand, the collaboration will begin the process of creating a shared vision – translated into action – of how local prevention efforts need to be strengthened or modified, or new efforts initiated, to ensure that East Valley youths grow to be contributing members of society and the root causes of juvenile crime are attacked.

The Youth Emergency Services Camp (YES) is offered once a year by the San Bernardino County Sheriff’s Department Volunteer Forces. The Redlands Police Department supports the camp by sending personnel to instruct the participants.

The YES camp is a program designed to be a week- long resident camp for youth between the ages of 14 and 17. This “live-in” experience offers the youth a camp structured just like the field of emergency services.

Several theme days take place at the camp. The days have the following themes: Law enforcement, search and rescue, and fire service. During the instruction the scheduled activities involve those areas a professional in the field may be exposed to in the line of duty

The foundation for any community policing activity is based heavily on the successful development and implementation of community partnerships. It is through this collaborative use of community resources, members and organizations to accomplish common goals and solve problems that the community policing philosophy becomes an integral part of the community culture. Working as partners in a team environment develops trust and a sense of community among participants and those affected by the group’s efforts. A major result of these efforts is a feeling of ownership throughout the community for maintaining a high quality of life. The Police Department is committed to expanding on its current partnerships, with an emphasis on bringing new groups and individuals into the process. The Youth Accountability Board (YAB) is formed to address first time, non-violent juvenile offenders. It consists of a citizen review board that hears cases and recommends local work sentences.

For further information, please call (909) 798-7625. The Redlands Police Department, in partnership with the Redlands Unified School District and the San Bernardino County Juvenile Probation, forms the Police/School Liaison Committee. Representatives meet once a month. The goal of the committee is to discuss problems arising and to solve the problems in a fashion that best suits the community. The program has proven to provide an open line of communication, and its goal is to make the schools a safe place for all children.

The Citizens’ Privacy Council provides input and advice on department policy in its use of surveillance technology.

The Citizens’ Privacy Council assists the Redlands Police Department in their efforts to balance the use of technology in in public areas to enhance community safety with the citizens’ right to privacy.