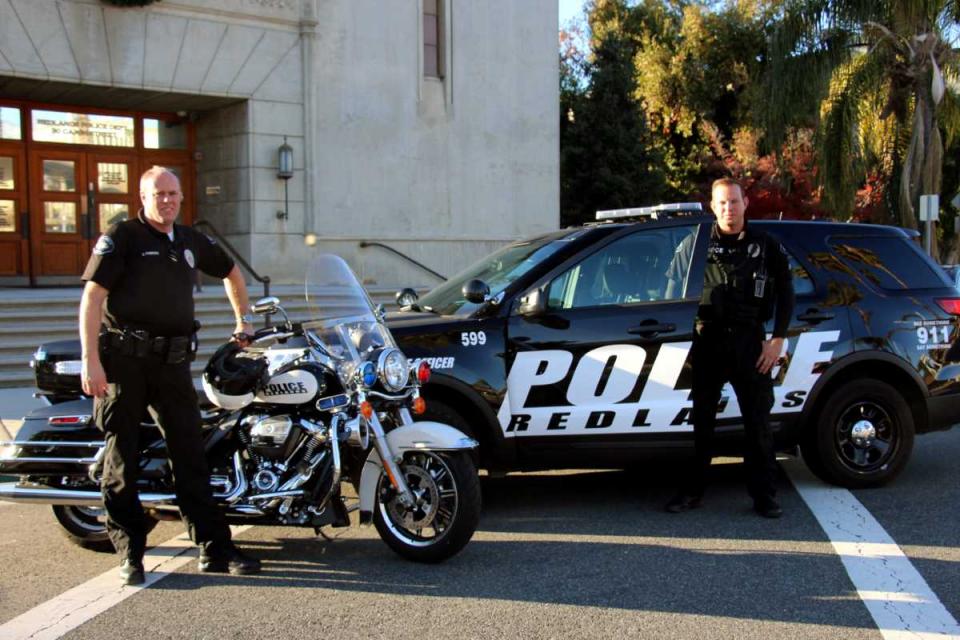 Jan. 10, 2019 – Responding to public demand for increased enforcement of traffic violations and a commitment to reduce injury collisions in the City, the Redlands Police Department has reinstated a dedicated traffic unit, which began work this month.

The traffic unit consists of two officers, patrolling full time in cars and on motorcycles. The unit is responsible for targeted traffic enforcement and investigation of major traffic accidents and hit and run collisions. The officers will concentrate on identified “hot spots,” areas where collisions and traffic violations are prevalent.

In June 2018, the Redlands City Council approved the addition of two new sworn officers for the department, effective Jan. 1, 2019. At that time, Chief of Police Chris Catren pledged to re-establish the dedicated traffic unit and restore the department’s ability to conduct regular traffic enforcement with the goal of reducing injury collisions. The traffic unit had been discontinued in 2008 due to budget and personnel reductions in the department. Since that time, traffic enforcement has been handled by officers on special limited grant-funded overtime duty and by regular patrol officers in between handling regular calls for service and other proactive policing.

The officers in the re-established traffic unit will concentrate solely on traffic enforcement and investigations.

“These officers will be charged with conducting traffic enforcement operations based on a combination of data driven strategies and citizen complaints to address the most dangerous intersections for the violations most often contributing to injury collisions,” Catren said. “It is my hope and expectation that the increased traffic enforcement and education will result in significantly fewer injury collisions and make the streets safer for pedestrians, cyclists and motorists.”