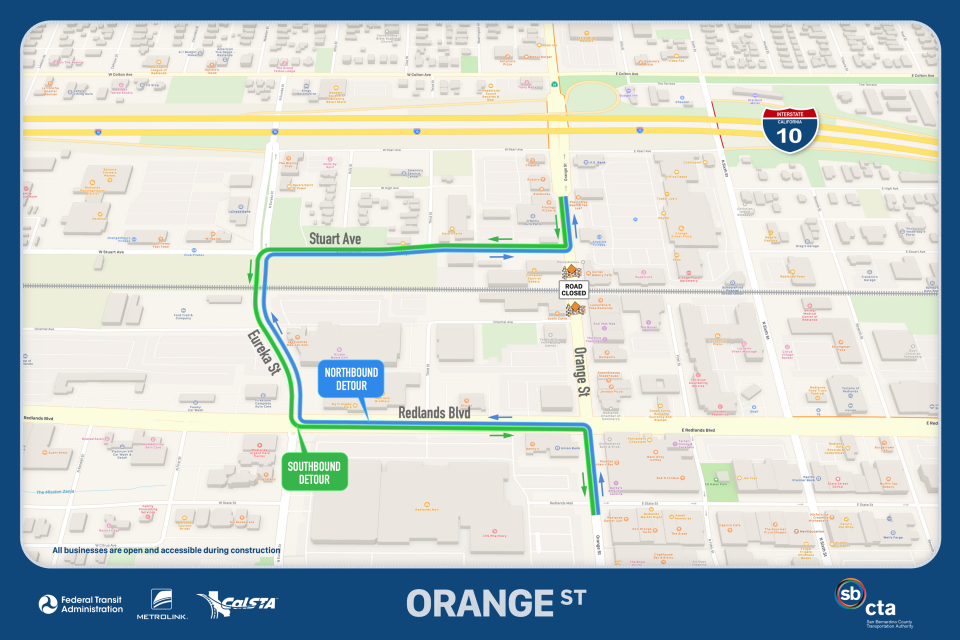 To better coordinate with the City of Redlands pedestrian crossing improvement project on Orange Street, contractors for the San Bernardino County Transportation Authority’s are moving up plans to pave Orange Street at the railroad tracks south of Stuart Avenue as part of the Redlands Passenger Rail Project.

The paving project, which will take place Friday, July 10, will require lane closures, including a full closure of Orange Street at the railroad tracks from approximately 9 a.m. to 4 p.m. Detours will be put in place and access to all businesses along the corridor will be provided.

The paving project will allow the scheduled installation of permanent crosswalk improvements at Orange Street and Shoppers Lane to move forward without additional expense to the City.

The Redlands Passenger Rail Project, an advanced regional transportation project designed to connect residents, businesses and visitors to a variety of leisure, education, healthcare and other destinations, is being managed and constructed by the San Bernardino County Transportation Authority and funded with regional transportation funds. The nine-mile rail project includes three stops in Redlands, including one at the Santa Fe Depot in Historic Downtown Redlands. Two other stops will be at New York Street and at the University of Redlands.

In addition to Orange Street and Shoppers Lane, the City of Redlands pedestrian crossing improvements project will include six other crosswalk improvements along Redlands Boulevard between Fifth and Clark streets; and on Citrus Avenue at Central Avenue.

The improvements include in-roadway lighting, thermoplastic crosswalk striping and additional reflective signage at the uncontrolled intersections on Redlands Boulevard at Fifth, Seventh, Ninth, State and Clark streets, along with Orange Street and Shoppers Lane and Citrus Avenue at Central Avenue.

Construction of all seven sites is expected to take about six weeks. Work will be performed between the hours of 7 a.m. and 4 p.m. Traffic lanes will remain open in all directions but motorists should expect delays. No parking signs will be posted 48 hours in advance of construction activities commencing. The City will work to minimize impacts to businesses and residences as much as possible.

For more information, contact the Municipal Utilities and Engineering Department at (909) 798-7698.