History of the Fire Department 1888 to Present 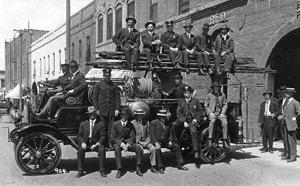 “Redlands Hose Company No. 1 was organized last Saturday evening, the April 27th, 1888, with Ralph Levy as Foreman.” It was determined that the original number of firefighters should not exceed 25!

“It is of vital importance to our city that we have good protection from the fiery element, and the organization of a first-class hose company is a move in the right direction.”

Officially, Ed Mosbough became the first paid full-time Fire Chief in 1910. He had been with the Redlands Fire Dept since October 16, 1890. That same year, the first motor driven piece of equipment was purchased, a 4 cylinder air cooled Seagraves. It had two 35 gallon soda acid chemical tanks, 150 feet of 1” chemical hose, 1000 feet of 2 ½” hose, a 24 foot extension ladder, solid rubber tires and some small tools.

In 1913, the city voted for complete motorization of the dept. Later that year “Chief” (The horse) died of a broken heart and spirit.

In the summer of 1910, Charles L Ary becme Fire Chief. At this time, the department boosted a compliment of four full time paid men. Their work scheduled at this time allowed them only 65 days off in the entire year! 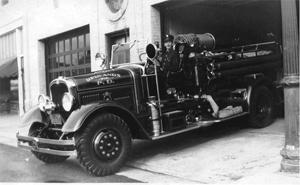 A REO 350 gallon combination was purchased in April 1923. At the same time, Horace Green became Fire Chief. In January 1924 another pumper was put into service. It was a 500 gpm Seagraves. It carried an 80 gallon chemical tank.

In July 1927, H. Holt was appointed Assistant Chief, and was made acting Fire Chief in 1928. He served in this office until November 1928 when Perrin G. Trowbridge was made Fire Chief.

1930 brought about a welcome change. The department switched to pneumatic tires. On April 22 1931, the department purchased a city service ladder truck on a Mack chassis. It also carried a 100 gallon water tank, a small power take off pump for booster only.